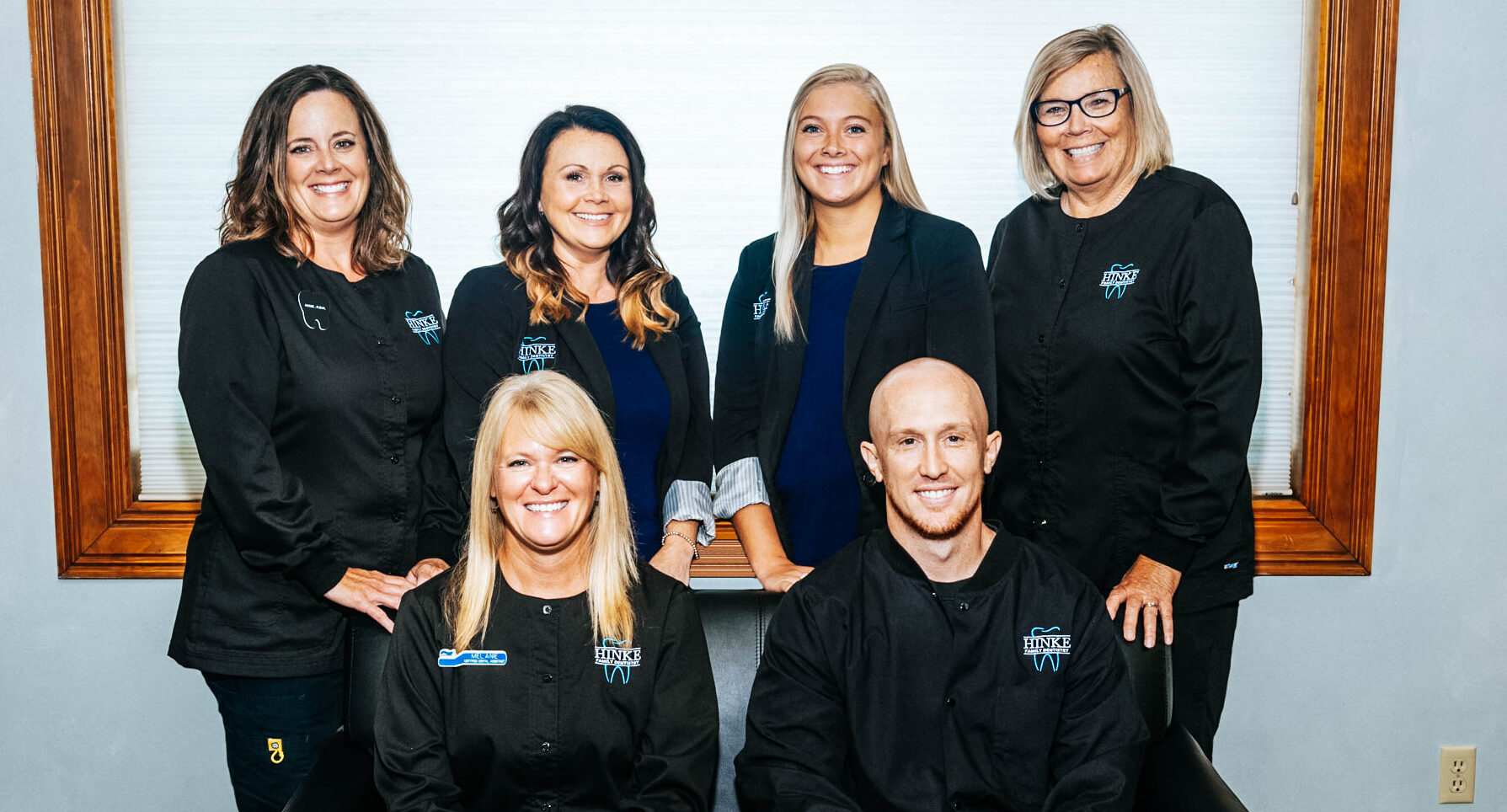 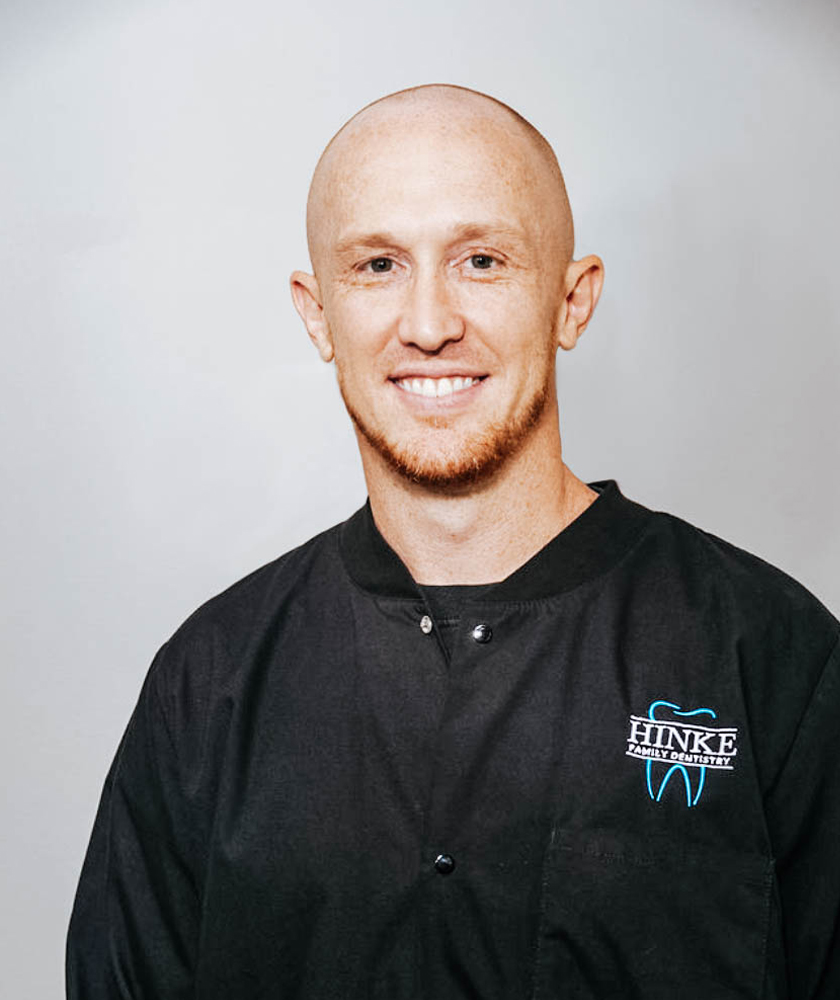 Dr. Lucas Hinke is a general dentist who is from Cedar Falls, Iowa. He attended the University of Northern Iowa where he completed his undergraduate studies.  He continued his education at the University of Iowa where he graduated with his dental degree in 2009.  He began his professional career in St. Louis, Missouri working in Public Health.  After working in Missouri for 5 years, he decided to move back to Iowa and has been practicing dentistry in the Des Moines area since 2015.  Dr. Hinke is excited to have recently started his own practice, Hinke Family Dentistry.

He enjoys hobbies that include playing tennis, hiking, working out and spending time with his wife Megan and their son Wyatt.

Dr. Hinke and his staff look forward to serving Altoona and the surrounding communities with their dental needs. 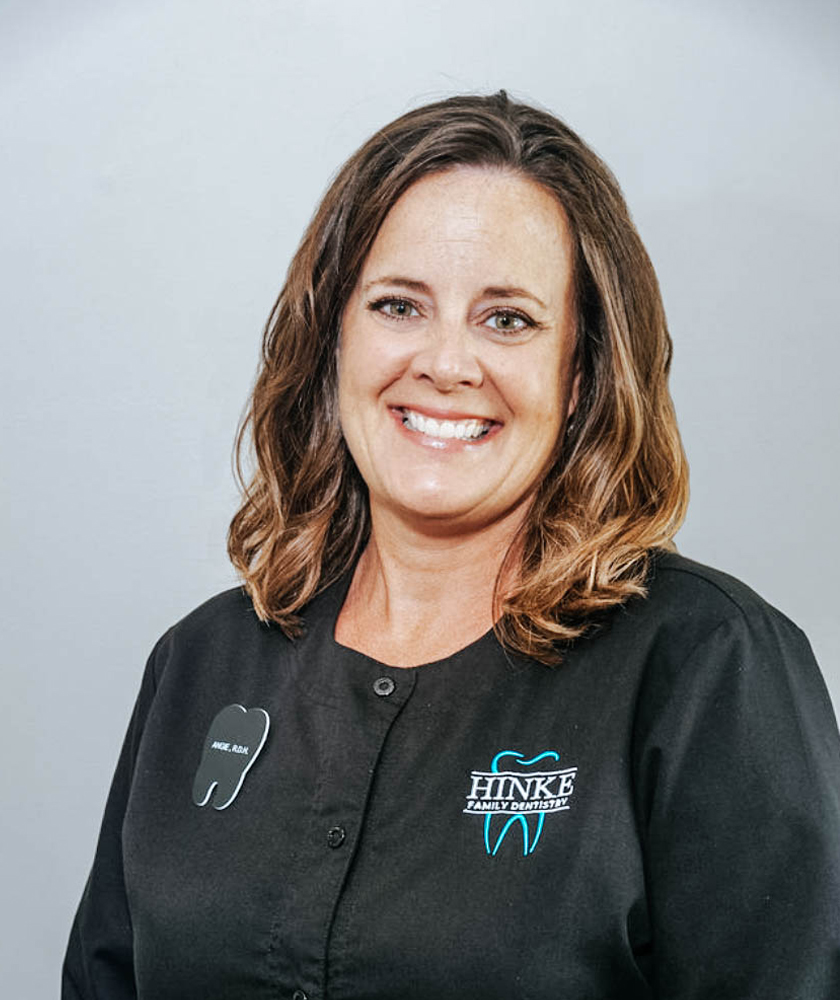 Angie graduated from the Dental Hygiene program at DMACC in 1996. With over 22 years of experience, she has truly enjoyed meeting new people and helping her patients improve and maintain healthy smiles.

In her spare time, Angie likes biking, traveling, watching Cyclone sports and spending time with family.  She and her husband are kept busy with their grown children and spoiling their grandchildren. 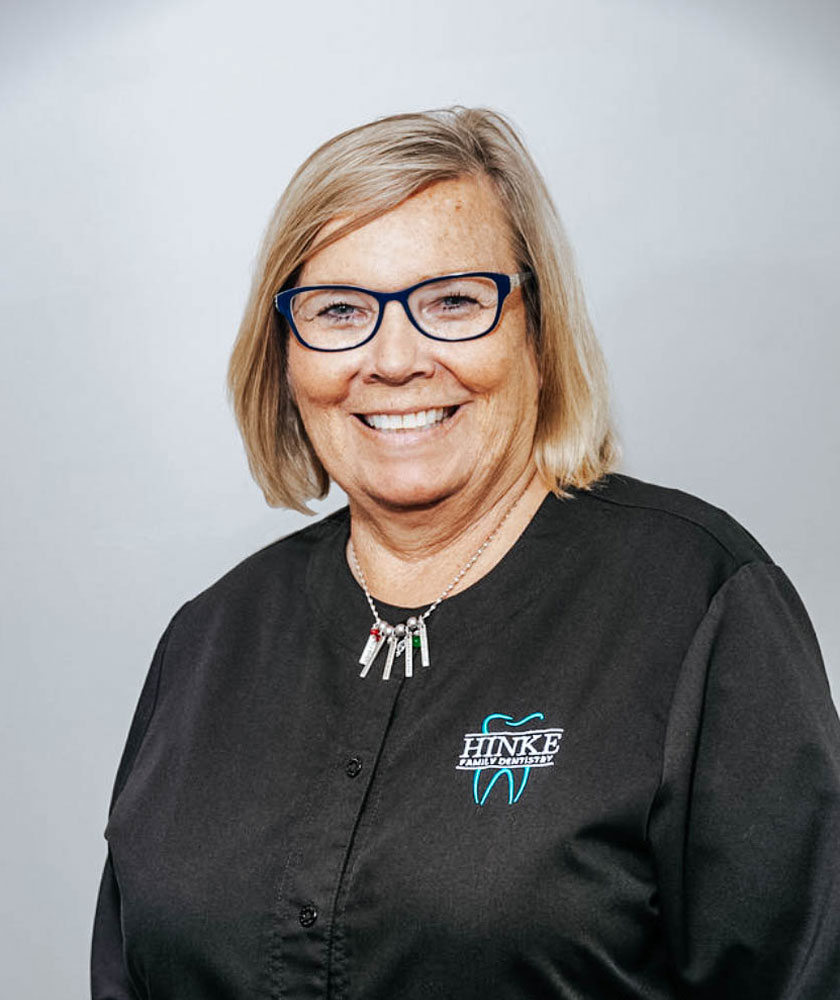 Becky graduated from DMACC in 1989.  She began her career as a Dental Hygienist that same year and has been working in the same office for 29 years.

In the Summer, she and her husband enjoy spending time at Saylorville Lake on their houseboat. In the Winter, she enjoys attending her 5 grandchildren’s activities and vacationing where it’s warm!

Jen graduated from the Dental Hygiene Program in 2003. She is committed to providing quality care in a gentle, caring and efficient way.

She loves seeing her patients smile!

Jen loves to spend time with her family. A wife and mother of two teenage daughters, jen spends most of her time going to their activities.

Kate graduated from DMACC in 1996 alongside our other hygienist Angie. She is glad to be working with her classmate Angie. Kate has been in dentistry for 30 years. She has 7 sisters and one brother that all live in the Des Moines area. She has been married for over 20 years to her husband Rich who is a radiologist at Mercy One. Kate has 2 step kids and 3 wonderful grandkids. She is glad to be part of the team at Hinke Family Dentistry. 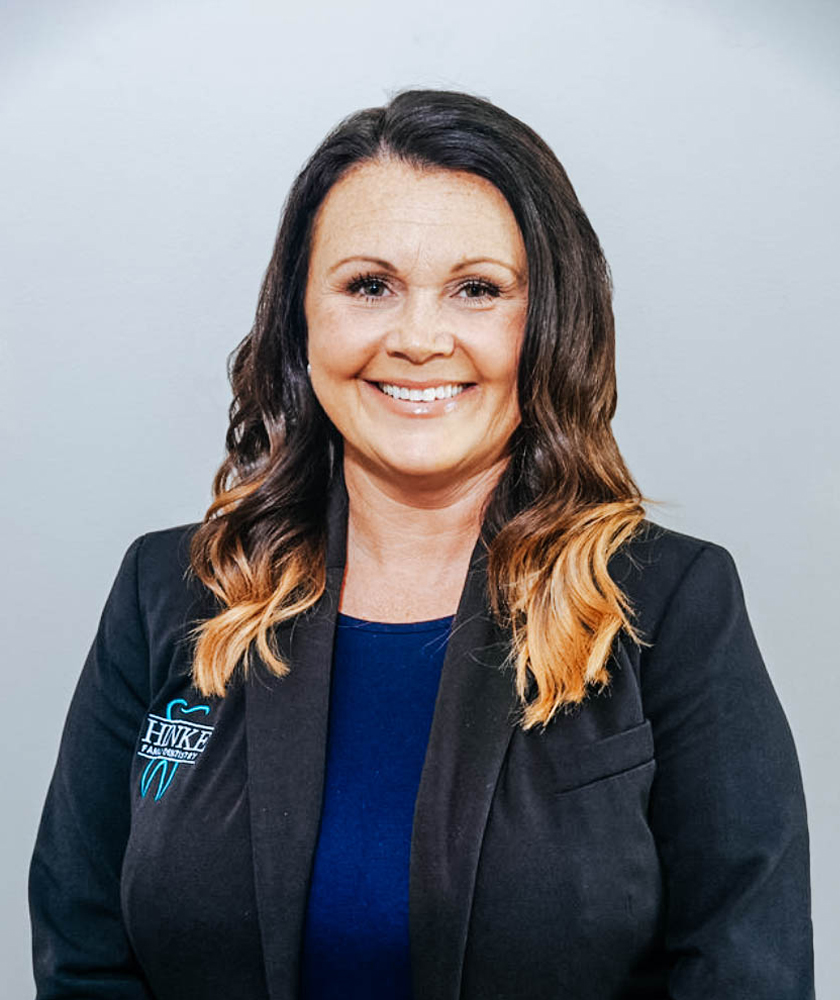 Nikole graduated from the Dental Assisting program at MCC.  She began her career as a Certified Dental Assistant 24 years ago working in this very building.  Although Nikole left the dental field for a while, she returned to her roots 4 years ago and truly enjoys working in the front office, helping patients with their needs and greeting everyone with a smile!

Nikole spends any free time she has doing what she loves most…being a wife and mom of 3 teenagers! She enjoys every chance she has to cheer them on in all of their activities. Nikole also claims to bleed Black and Gold for her Hawkeyes and loves any chance to talk about them. 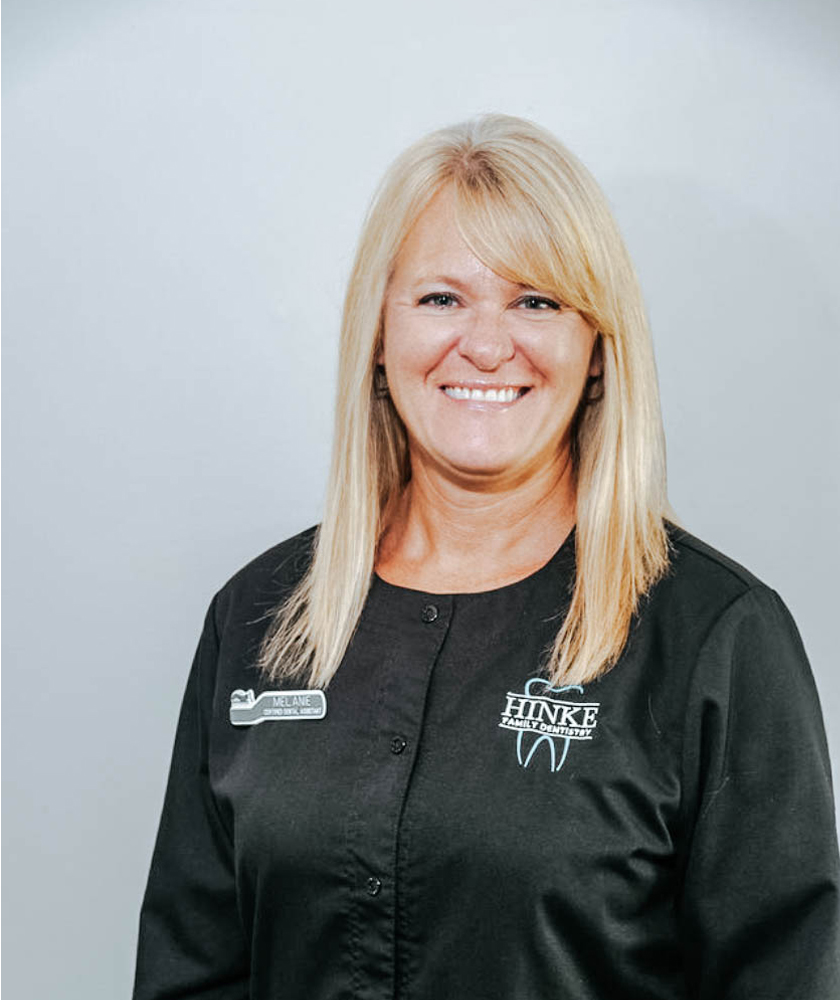 Melanie graduated from the Dental Assisting program at DMACC 26 years ago.  She has worked in the same office her entire career as a Certified, Registered and Expanded Functions assistant.  Melanie loves giving patients their confidence through their smiles.

Melanie likes to spend her free time riding her bike, fishing and spending time outdoors tending to her flowers and garden.

Lauren is currently finishing up her last semester at DMACC online where she will earn her Liberal Arts Associate degree. Lauren has always had an interest in the dental field which is what led her here! She says although she is new to the dental world, the staff is making the transition much easier.
In Lauren’s free time she enjoys going boating and laying out in the sun when it’s summer and going snowboarding when it’s winter. She loves trying new things and learning new skills.